A Non-Violent Response to Violence. 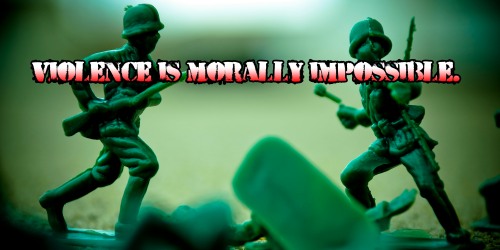 The question always arises when my pacifist theology is exposed in front of others is, “what would you do if a man was attacking your wife, or a child?” Would you attack the man? How could you not act violently to them?”
To these questions I will refer heavily upon Leo Tolstoy words from the book, What Would You Do?

“There are actions which are morally impossible, just as other are physically impossible. As a man cannot lift a mountain, and a kindly man cannot kill an infant, so a man living the Christian life cannot take part in deeds of violence.”
However, this is a statement many have a hard time agreeing with when the question arises about defending a child from a madman, or a woman from an attacker.
“It is generally assumed that the only possible reply is that one should kill the assailant to save the child [or the woman]. But this answer is given so quickly and decided only because we are all so accustomed to the use of violence—not only to save the child, but even to prevent a neighboring government altering its frontier at the expense of ours…”
“If the man be a Christian and consequently acknowledges God and sees the meaning of life in fulfilling his will, then however ferocious the assailant, however innocent and lovely the child, he has even less ground to abandon the God-given law and to do to the criminal as the criminal wishes to do to the child. He may plead with the assailant, may interpose his own body between the assailant and the victim; but there is one thing he cannot do—he cannot deliberately abandon the law he has received from God, the fulfillment of which alone gives meaning to life.”
Furthermore Tolstoy inquires into how someone can judge who needs to be saved. For he argues that no man can see into the future to see what either of the two people will become.  Moreover, what if one or both of them are not Christians? That means by ending their life you vanquish all possibilities for them to come to the saving knowledge of Christ.
“There is no moral law concerning which one might not devise a case in which it is difficult to decide which is more moral, to disobey the law or to obey it? But all such devises fail to prove that the laws, ‘Thou shall not lie, steal or kill,’ are invalid.”
“Excuses can be made for every use of violence, and no infallible standard has ever been discovered by which to measure the worth of these excuses. Therefore Christ taught us to disbelieve in any excuse for violence and never to use violence.”

Two wrongs do not make a right. And as Christians we have to believe that evil can be overcome with good. If we fail to believe this we have not only abound our Christian morals but our savior as well, who laid down his life, so that we may inherit life.

I don’t suppose that this is easy to live nonviolently in the face of such evil. However, what is easy and what is right don’t always go hand in hand.

Violence only begets violence. Violence will never lead to free peace.  In a totalitarian state violence may help to keep its subjects under submission and fear, but in the absences of that power violence will flood forth and all former peace will be lost. Peaceful non-violent action is the only way to sustain peaceful nonviolent action. We have to believe in the power of Christ love, but not only believe but also live it out. Then and only then will lasting peace be possible.